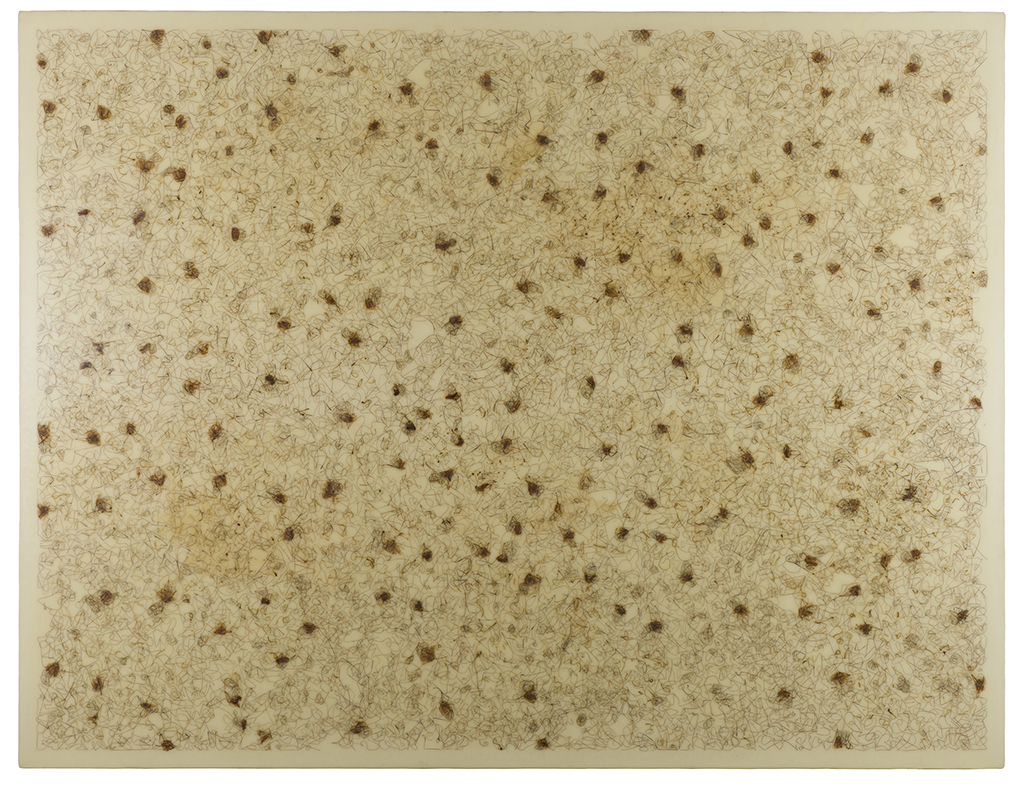 Erdoğmuş’s big-sized canvases, composed namely out of silk tree, datura, lilium and clove leaves gathered from nature, are classified according to their shapes and types before they are dried between pages of giant notebooks. They are the words that form the vocabulary of the artist. These materials also constitute the origin of a long and meticulous painting process.

After the chemical reactions created by the overlapping layers that Erdoğmuş brings together by using a unique technic, the whole canvas turns into an image. Resembling natural science labs of ancient times, the studio of the artist becomes the site where this exciting experiment takes place. In this laboratory, the painting becomes a vehicle for the creation of alchemy. Mind and serendipity, craftsmanship and art become intertwined in the hands of a modest and patient dervish.

In the techne of Erdoğmuş, Naturemorte regains an existence by becoming part of the texture of the canvas. This action resembles both a restoration and a repair. In these heavily processed works, the natural beauty of dried leaves is lost due to their interaction with chemicals, and is replaced with another form of beauty chosen by the artist.

What we see on these canvases is the process in which plants are turned into an image with the help of the artist. Their existence is so genuine that they appear as if they are found in nature or formed on their own. The canvases do not represent anything other than themselves and become autonomous aesthetical beings. The snippets of images that appear on the surface of these self-expressive paintings become in fact the traces of the buried history of the canvas itself.

Erdoğmuş’s Naturas allow us to grasp various layers of perceptions at the same time. The painting’s memory is reflective of its semantic range. Resignation to the visual demands of the paintings fuel the allure of an outer space view of earth that Erdoğmuş’s works mysteriously possess. At the same time, baring resemblance to the pixels of the digitalized world, it carries the potential of branching out into microcosms. Whilst Erdoğmuş pushes the boundaries of representation, he grants his audience a visual feast.

During the exhibition the audience will also find a chance to witness behind the scenes footage of Erdoğmuş’s work. A video featuring stages and process of the artwork over a year will give an in depth understanding of the artist’s technique and philosophy.

Tayfun Erdoğmuş’s “Natura” exhibition will be showcased until the 31st of October in Galeri Nev Istanbul. The gallery is open from Tuesday to Saturday, between 11.00 and 18.30.